The Papua New Guinea Centre for Judicial Excellence (PNGCJE) has conducted another awareness on “Basic Rights and Fundamentals of Justice” which adds to a total of four awareness programs in four weeks.

The awareness was held at the Mahuru Gaudi Memorial United Church in Vabukori village, Port Moresby on 11 August 2021 which saw over 50 people attending and participating in interactive discussions on constitutional rights and freedoms, and how to access justice through the courts. 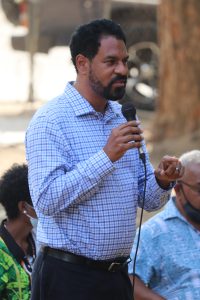 They explained the different types of Constitutional Rights that people have and the process to go about seeking justice if and when their rights are breached.

“There are different types of rights that we are entitled to, but when exercising these rights, we must ensure that the rights of other people are not infringed,” said Dr. Carey.

“There are systems and processes to ensure justice is served and we must always follow these processes to do it the right way,” he said.

Many questions have been raised by the community members on law-and-order issues in their community. Some of the major issues mentioned include land rights, social order and the most being the village courts’ inefficiency.

Many of the villagers said their Village Court has not been operating and has been inefficient in dealing with day-to-day law and order issues in the community. They said they have nowhere to go to seek justice for issues that can be solved at the village level.

The PNGCJE explained that the Department of Justice and Attorney General (DJAG) has been working on redeveloping the Village Courts and it is the right office to provide a clear answer to that. 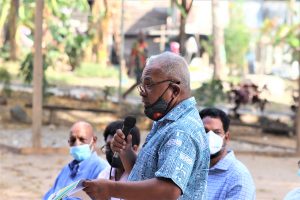 Chairman of the Vabukori community Mr. Reatau Rau thanking the PNGCJE for reaching out to his community.

The PNGCJE also highlighted the different categories of offences and how to go to the District and National Courts to seek justice if the Village Court is not working, such as summary offences such can be brought to the District Court and human rights cases can be directly registered with the National Court.

“Most of our people just live their lives without worrying about the law and how to seek justice though the courts,” said Mr. Rau.

“We think that we’re not affected, but if we’re faced with an issue and need justice, we need to know where to go to get it.”

“I am grateful for this awareness and I think we need more of this in our community and other communities as well,” he said.

programs carried out in six different communities within NCD and the Central Province. PJSI is funded by the New Zealand Ministry of Foreign Affairs and Trade (NZ MFAT). 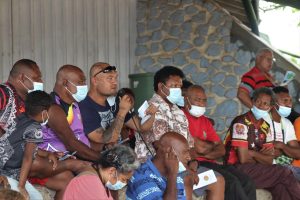 Members of the community asking questions and participating in the discussions. 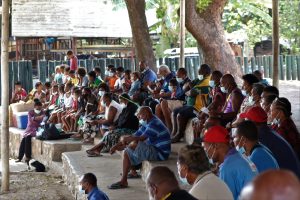 Members of the Vabukori community paying attention to the information given during the awareness.